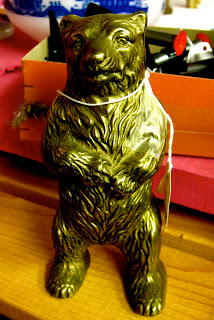 A heartsick bear is a terrible thing. When a bear is in mourning, they sing. And I've never met one who can carry a tune.
Simon, on the third shelf is suffering badly and none of us knick-knacks have slept properly in days.
It started with the humans, as it always does. The mother and son were arguing again, their words sharp and fierce. And this time, the boy opened the door to his mother's cabinet, snatched up Vince the cat, and hurled him against the wall.
Poor Vince was made of glass. He shattered, and the woman fell to her knees amongst the shards and cried.
Three shelves down, a horrible sound joined her sobs.
"Wise men say, only fools rush in. But I can't help falling in love with you."
Simon, singing his heartbreak. No one had suspected his love for Vince.
A few days later, the boy brought his mother a porcelain skunk. Her name was Layla, and she'd once belonged to an old woman with papery skin who smelled of jasmine flowers. The women held Layla in her palm and they'd rock in her wooden chair.

The skunk took Vince's place in the cabinet. She tried to share her stories of the old woman, but Simon ignored her and continued to sing.
Then the strangest thing happened. Layla's song started small, barely more than a whisper. It grew and grew. They began to harmonize, the bear and the skunk. They sang together, their voices tracing a pathway through everything they'd lost.
"Like a river flows, surely to the sea, darling so it goes, some things are meant to be. Take my hand, take my whole life too. For I can't help falling in love with you."
Posted by Brittany Smith at Monday, January 02, 2012