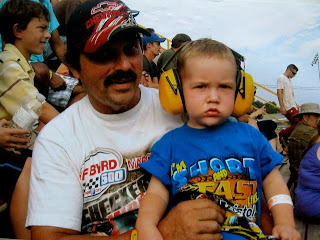 (Story based on a photograph found on the ground outside a grocery store.)
When Damon was four years old, his Uncle Greg choked on a Maple Leaf's All-Beef sausage. They were at Barrie Speedway for opening day. Uncle Greg had the camera, and Dad held Damon on his lap.
Damon remembers the smell of french fries, gasoline, and sweat. He was wearing a pair of yellow protective earmuffs, and sounds came to him as if he was underwater. He had to pee, but couldn't tell his Dad because they were about to take the picture.
Uncle Greg took a bite of his hot dog and raised the camera to his face. Click went the shutter. Greg dropped the camera and toppled into the aisle on his back. His hands went to his neck.
"Help us!" Dad yelled, "someone!"
Greg's face turned blue. His eyes were very wide and tears streamed down his cheeks. Then somehow, Dad hauled Greg up and stood behind him. He made a fist with both hands over Greg's chest and pumped hard.
A chunk of sausage flew from Uncle Greg's open mouth.
For a moment, everything was still. Then Uncle Greg gulped in air. The people around them started cheering and his Dad raised both hands in the air like he'd just won the trophy.
Damon still had to pee. His bladder was cramped. And then, because he didn't know what else to do, he went.
Posted by Brittany Smith at Wednesday, January 11, 2012