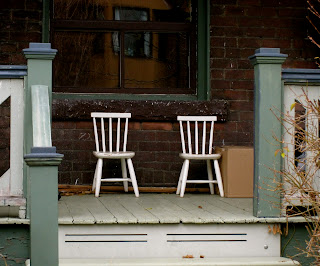 "Bob?"
"Yes, Rob?"
"How come you get more butts than me?"
"Tell me you aren't starting this again."
"No, really. I've been thinking."
"Well, there's your first mistake."
"Listen, Bob. There's something wrong with me. I'm flawed."
"You're not flawed. We're exactly the same. And I don't get more butts."
"Why do you gotta lie about it? Why can't you just say: "Yes, Robert. More people seem to prefer to rest their bottom on my particular seat."
"You're unbelievable, Rob. Crazy as a porch swing. But not flawed."
"Bob, the postal man perches on you when he sorts the mail. The woman sits on you when she reads her How to Get What You Want book, and drinks her gin and tonic. And last week, you even got that guy who came to take her out for dinner and was early. Who did he sit on when he smelled his own armpits and tucked in his shirt? YOU. Jeeze, Bob. Even that horrible cat will scratch my legs and sniff my base, but he sleeps on you, not me. You get way more butts, and I am fundamentally flawed. Case closed."
"Okay, Rob. Fine. Here's our big chance to prove there's nothing wrong with you. The woman's ex-husband is coming this way. He's gonna sit while he waits for her daughter to come out of the house. So which one of us is it gonna be? Ha. Ha. I knew it, Rob, you old chunk of plywood. Her ex-husband picked you. So there goes your whole argument."
"Bob?"
"Yes, Rob?"
"I think you might be flawed."
Posted by Brittany Smith at Monday, February 13, 2012