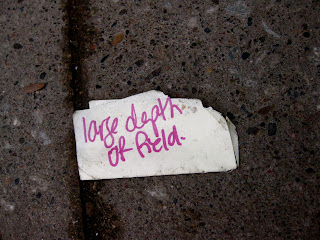 Neil Bling can't take his suit jacket off. Underneath his clothes, are little notes taped all over his skin. Whenever he forgets what to say, Neil ducks into the bathroom and lifts his shirt, or rolls up his pants.
As the director of this film, Neil's expected to say a lot. They're behind schedule and the producer is riding him every chance he gets. Their star, Bonnie Bernard is spending most of the day boozing in her trailer, and that teenage delinquent, Pax Malone has already worked through three hairstylists. Neil's got to pull this picture together pronto.
The memory loss stuff started a month ago. Neil was on his way to New York to meet with the executive producers, and while going through customs at the airport, he forgot his address. His mind just went blank, like a large white balloon. When he got home, he didn't tell Kate. How could he? She'd just worry.
Then a few days later, they were eating breakfast and he looked down and thought: "what's this metal thing in my hand called?"
Spoon.
Neil hasn't taken a sick day in thirty-five years. He's not about to start now. So he began writing notes to himself.
"What's the next set-up, Neil?"
"You want us to get the Dad's POV next?"
"Should we break for lunch, Mr. Bling?"
"What would you like for dinner, sweetie?"
"Do you think taupe is a better choice for the living room walls? Or would you prefer dusty mauve?"


Hang on folks. Be right back in a moment.

Neil is the scarecrow in the Wizard of Oz, stuffed with paper, not brains. And its been working, except today he's on set wearing that blazer in the August sun. He feels a trickle of sweat run beneath his shoulder blades. And then to his horror, he looks down to find a note with the words: "focus on character development," at his feet.
The adhesive must be giving way in the heat. He makes for the bathroom as fast as he can, with little pieces of paper falling from his sleeves as he goes.
In the bathroom stall, Neil sits on the closed toilet seat and holds his head in his hands.
On the floor beside his shoe, a note says: "large depth of field."
He takes out his cell phone and with shaking hands, makes a call to his wife.
Posted by Brittany Smith at Monday, February 27, 2012