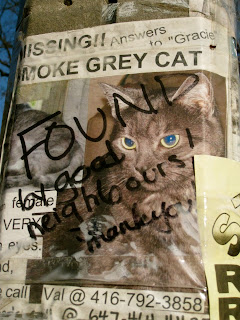 Arnie found Gracie, the neighbour's missing cat. Instead of bringing her home, he kept her locked in his playhouse, and brought her kippers in a can and table scraps wrapped in a napkin. He stroked her soft grey fur and listened to the hum-tick sound of her purring. "You are mine now," Arnie whispered.
In school, he drew pictures of Gracie in the margins of his notebooks. He planned to save up his allowance and buy her a red collar from Kibbles Pet Store. In the summertime, they would go down to the creek and catch fish.
Tuesday, Arnie's twin older brothers stopped him on the way to his playhouse with his pockets were full of chicken bones and roast potatoes.

"You're up to something," Maverick said, "isn't he, Ice Man?"
"Definitely. Something that needs a Punishing."

Arnie's legs turned to jelly. He lived in fear of their Punishments. His eyebrows still hadn't grown back in from the last one.
But this time, Arnie's thoughts were not on himself, but Gracie. "Who will feed her kippers, he wondered, when I am tied to the fence with a bucket on my head?" (These kinds of things were common elements of a Punishing.)
It was then that Arnie knew he had to let Gracie go. And when he realized this, the same happiness filled him as did when he was petting her nice soft fur.

"What are you smiling for?" Maverick nearly spat. "Grab his legs, Ice Man."
But Arnie's smile wouldn't budge. And that happy feeling didn't leave him, even when he was hanging from a tree branch with his shirt pulled over his head, waiting for his Dad to come home from work and cut him down.
Posted by Brittany Smith at Wednesday, February 22, 2012