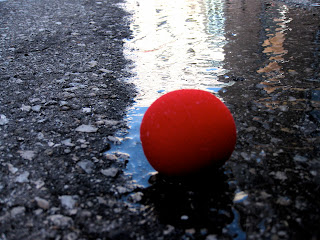 This is the third nose Davey's lost this month. He's gonna be put on probation. Instead of opening the show, he'll be mopping the lion's cage and scrubbing the elephant's behind.

Mrs. Spinks doesn't care that he's a genius on the unicycle, or that he's moved on from bowling pins to juggling barstools. It doesn't matter. What's a clown without his nose?

At the next table in the dressing room, Wilhelm the tightrope walker has his feet up on the counter, doing exercises to limber up his toes. Suzanna is beside him, combing her beard. Davey turns away from them so they won't notice something's wrong. These carnies will use it against him first chance they get. Everyone wants to be an opener.

It really wouldn't be so bad if it wasn't for his Ma. Davey got her a special spot tonight, front row in the big top with room for her wheelchair. She'd wanted him to become a professional. She'd even enrolled him in business school without telling him, and bought all the textbooks. But Davey was born a clown. He is a clown in his guts and bones.

Except now that he's lost his nose, he can't perform.

He pictures the disappointed look on her face. He sees that mole on her chin with the grey hair move as she frowns. Oh, mole! Oh, Ma!

Davey feels the tears come. He jumps from his dressing room seat and heads for the exit. Outside, he sits and begins to sob. Fat tears wet the front of his plaid polyester suit.

Then, along comes a small gust of wind. It's so light a breeze, it only ruffles Davey's wig slightly, but he looks up. And there on the ground beside him, is his nose.