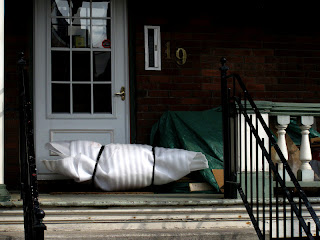 She arrived fully assembled. Garth dressed her in a white silk blouse and yellow skirt he'd bought at Fashionable Miss in the mall. She was beautiful, with auburn hair falling in soft waves down her back. She had wide eyes fringed with delicate eyelashes and full smiling lips. Melinda 357A.
Garth preferred to call her Mel. For their first date, he took Mel to the park where they watched ducks swimming in the pond and ate brie cheese and stoned wheat thins. Garth told Mel about his decision to leave Elmdale and head to the city to pursue a career as a Chartered Accountant. Mel listened intently, and when he told his accountant joke, the one about insolvency claims, Garth was pleased to look over and see her smiling face.
When they stopped for ice cream cones, Mel's left hand fell off. Garth quickly picked it up and tucked it into his suit jacket pocket.
Near the fountain, she lost a leg. He had to retrace their route in order to find it. He placed the leg into his wicker picnic basket where it jutted out like a loaf of baguette. They continued on. Garth wanted to go to the booth where they drew cartoon caricatures of couples with big heads and tiny bodies. He thought it was a hoot and had always wanted to get one done but never had somebody else to bring. Until now.
On the way, Mel's right foot came loose and her nose snapped off. Then, just before they arrived at the caricature artist, Garth heard a crack and Mel's lovely head tumbled from her neck. He looked down at that beautiful smile of hers, and felt a surge of love. He didn’t mind that she was in pieces. What relationship is perfect?
Posted by Brittany Smith at Monday, March 26, 2012