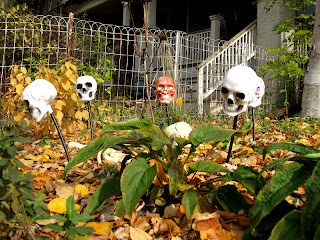 The morning smells of fallen leaves. Hector Schmit drives the wooden stakes into the ground, grunting with the effort. He'll pay for this later when he can barely stand for the pain in his lower back. Still, it's worth it.
At the top of each wooden post, Hector carefully places a plastic skull.
His hands around each cranium are wrinkled and liver-spotted. Are these his hands? He bends to retrieve a fallen stake and his knees protest like rusty door hinges. He's old. The past year has been rough. Too much time spent in his recliner chair wondering what the damn purpose of it all is.
His life. Wasn't he supposed to do more with it? Take up sailing. Go and see that crazy Stonehenge in England. Learn about wines. Find his first love, Sarah, and tell her it never got sweeter than it was with her.
But his days are spent taking up space in an armchair.
Then a month ago, Hector passed a "For Sale" sign on someone's lawn. He wrenched it from the ground and planted it in front of his next door neighbour's house.
The following day, someone knocked on the woman's door to find out her asking price for the house. On his front porch, Hector did a little victory dance.
She retaliated the next night with a pizza delivered to his door.
"That'll be $26.40, Sir."
Grinning, Hector paid the delivery guy. Cholesterol-be-dammed, he ate the pizza, slice by gooey slice, and plotted his next move.
When all of the plastic skulls are in place, Hector turns to flee. He feels a giggle rise in his chest and decides to walk home through the leaves, instead of taking the sidewalk.
Posted by Brittany Smith at Monday, March 19, 2012