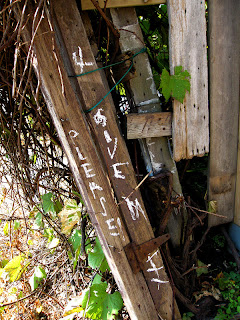 When the air was warm enough, I bought packets of seeds from the garden center. Calendula. Yarrow. Morning Glory. I didn't know what they were, but I liked the names.

I bought some dirt. Too much dirt, I realized later. The bag was almost as big as a child. Still, I hefted it onto my shoulders and wobbled home.

I forgot to get pots. No matter. Anything can be a pot. I rifled through the kitchen cupboards and gathered together a brown mug with a chipped lip, a red plastic bucket, and a blue soup bowl. I carried my collection into the backyard to the spot by the wooden fence, and got to work.

When I opened each of the packets, I was surprised at how unassuming the seeds looked. Little brown husks that were almost nothing, they were so small.
I don't know the rules of planting. I poured the contents of each packet onto the soil and covered them up. I dumped water over the top.

Then I went inside the house and cried. I'm not a wimp, but I can no longer control or predict when I'm going to bawl. It's like a valve inside me has broken. I'll be in the shower with my hair full of shampoo, weeping. One moment I'm at the deli ordering 200 grams of pastrami, the next, I can't see to pay through the tears.

Crying in public makes people uncomfortable. Try it. Next time you're standing in line at the bank, release a little sob. Let the sound grow into keening. Let that become a wail. Then watch the people around you edge away, as if sadness were something they could catch.

My seeds did sprout after all. When I saw the hopeful green shoots poking out of the soil, I was glad. Those little seeds were realizing all their potential. And I'd helped them along.

Was it enough to save me from the tears?

The day I ended my life, I wrote an apology first on the fence with a stick of chalk. I don't know who those words were for, but I wasn't here to see my Morning Glory bloom.