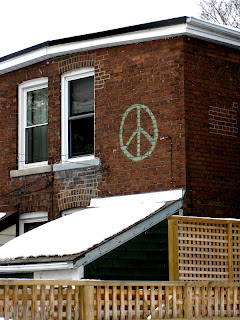 Vivian was worried about the state of the world.
In her grade six class, they were learning about global conflict. There were so many different groups of people fighting out there, it made her dizzy.

One afternoon she stayed after school. "What can we do?" she asked her teacher, Mr. Pomeroy. "Nothing," he said, smacking the chalk brushes together and creating a cloud of dust that got into her nostrils, "peace begins at home."

Vivian thought about her home. She saw her Mom's clenched jaw and her Dad's forehead creased with anger. She heard her older brother, Brian shouting.

In Afghanistan, kite flyers coat their kite strings with shards of broken glass to cut each other's wires in the sky. That's how it feels in Vivian's house: cris-crossed lines stretched between them, taunt and sharp.

The next morning, Vivian got up before everyone else and used Brian's handcuffs to lock herself to the front door of their house.

Her Mom found her first. "Viv, what on earth?" she said.
"Is this some kind of joke?" her Dad said.
"You moron," said Brian.

There wasn't a key to the handcuffs. Brian had lost it at camp last summer. Their arguing began.

"Oh, for god's sake, Brian. If you just learned to take care of your things," Mom said.
"Don't talk to him like that. It's not his fault," said Dad.
"Well, Henry, I can't just stand around. I'm late for work."
"I'm running behind too and you don't hear me complaining."
"Why can't you ever take my side?"
"How about when you've actually got a good point, I'll take it."
"Oh, here we go," Brian chimed in, "you two make me sick."
Their voices arced and dipped, searching for a weak place to slice. As she listened to her family argue, Vivian's dizziness grew. She sat down and leaned against the front door, closing her eyes.

Then something happened. Their fighting stopped. Vivian opened her eyes to see her Mom sit beside her on their dirty welcome mat. Then her Dad in his suit and tie lowered himself onto the floor and joined them. Brian hunkered down too, still wearing his jacket and ball cap.

Vivian's family stayed with her all morning, until the locksmith came.