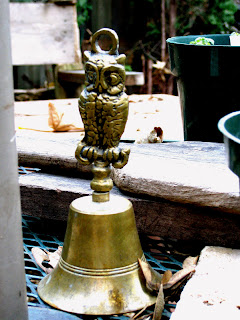 He likes working at the Pirate Burger, with ketchup and mustard that come in little plastic packets, and straws wrapped in paper to protect them from germs. Each fast food item is perfect and contained in its own way. He likes the soft white hamburger buns like breasts, and uniform squares of pale orange cheese.

At the front of the restaurant, Owl wipes the counters with a damp rag and a bottle of purple cleaning solution diluted 50:1. She misses half the crumbs. She might as well not be cleaning at all. Owl's real name is Susan. Manny looked at her driver's license once when she left her wallet open on the counter.

Owl has a brass bell shaped like an owl and insists on leaving on the counter while they work so customers can ring it. The dinging bell punctuates Owl's constant chatter. Manny wishes she was sealed in plastic like one of those disposable forks.

You can go to any Pirate Burger in the world and the food will be identical to theirs. Not that Manny knows this firsthand. He's never been further than Niagara Falls. But he's comforted knowing that a Captain's Combo would taste the same in Shanghai as it does in Sudbury.

Owl looks up, smiling at him with the rag in her hand.

"But I guess you know more than I do on the love front, eh? Manno? What's it now, 20 years you've been married?"

Manny looks away and focuses on dumping a bag of frozen shoestring fries into the fryer. Then he submerges the basket into the hot oil where they churn and bubble.

Grace wasn't there when he arrived home last night. Or the night before. This morning, he gathered the courage and opened her closet door. The empty wire hangers were like daggers in his chest.

A timer beeps, telling Manny the fries are ready. He raises the basket from the oil and shakes off the excess grease. They are golden brown, and cooked perfectly.