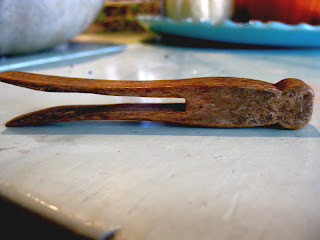 Herbert Dirt was a womanizer. He loved to watch females pass, with their hips and bottoms moving under skirts. Nothing made him happier than the sight of a pair of breasts, full and swinging.

"Oh, baby," he'd say under his breath as they passed, "gimmie some of that."

But Herbert Dirt never got much of anything at all. Because Herbert was a clothespeg.

Don't be shocked. I told you he was a womanizer. But here's the thing: even a clothespeg can change.

This is how it happened.

The afternoon was warm and the clothes were dry and smelled of sunshine. She came out of the house carrying a white plastic basket on her hip. She reached the line and began unclipping the shirts and pants and letting them drop into the basket. As she worked, Herbert admired her full lips and long unruly hair.

Then she looked up at the small blue t-shirt Herbert was holding. It was a boy's shirt, faded and worn. The woman gasped. Her hands flew to her mouth and then she reached out and yanked the shirt down. She pulled so hard that Herbert came away with it too.

She put the little t-shirt to her face and inhaled deeply.

Then all at once, she began to cry. Her shoulders trembled, and Herbert, caught in the middle of the bunched up ball of fabric, shook. She wept into the shirt and Herbert's world became her hot breath and raw sobs.

He'd never heard a sound like this before. He didn't even know that someone could make such a sound. He longed to stroke her face, to hold her, to make her crying stop.

So he did the only thing he could think of to do. He dropped into the pocket of her dress and lay there against her hip. Later, she would find him, and return him to the empty line until the next laundry day. And to everyone who passed, Herbert would look like the same dented little clothespeg.

But he wasn't at all.