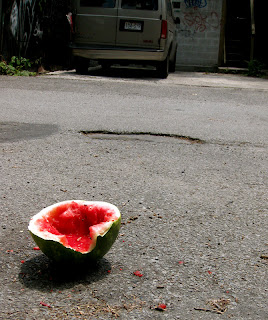 Kelsie puts a box of tea into the cart and Bram picks it up.
"What's this?" he says.
"Oolong," she says.
"The No Name version's cheaper."
"I like this one."
"You just like the box. You're a marketer's dream."

Bram switches for the No Name one and continues down the aisle. Kelsie follows. She leans heavily on the front of the shopping cart, letting it take her weight, moving in shuffle-steps. When she arrives at Bran, he deposits his armload of groceries into the belly of the cart.
"Look, this cereal is fortified with yogurt," he says.
"Why don't we just eat yogurt?"
"That's not the point."

In ancient tribal societies, men went out in hunting parties. Women prayed and pulled their hair. Finally, the triumphant hunters returned, streaked with blood and bearing the weight of a killed buffalo. They all danced and feasted in celebration.

In Aisle 4, a smiling lady in a red smock offers them a hunk of breakfast sausage on a toothpick. Brant eats three, grinning at Kelsie as if they are in a commercial.

Later, they load their collection of plastic shopping bags into the trunk of their mini-van. Kelsie sees a watermelon someone left behind them on the pavement.

They climb into the van. Kelsie turns the ignition and with the car still in park, hits the gas. The engine revs and the sound is fierce, like a growling lion.

"Kel--?" Brant says.
Without answering him, Kelsie shifts into reverse, backing over the watermelon and smashing it to bits.
Posted by Brittany Smith at Monday, July 16, 2012