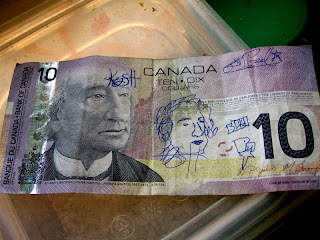 Dale is with Sophie at the Hakuna Matata Bar & Grill. They're both well dressed: he in a suit and tie, and she in oyster colored silk with a string of pearls around her neck. An elegant couple, out of place in the dingy bar.

On the table is a basket of fries and a few hunks of breaded cod. The food is getting cold.

Dale pulls out his wallet, even though the waitress is nowhere to be seen. He just wants Sophie to know he's got this, that he can at least pay the bill. But then the wallet sits on the table like a removed organ, a smooth brown kidney. It makes Dale nervous, so he opens it and pulls out the thin stack of bills. As Sophie talks, he uses his pen to doodle on the money.

He doesn't look up from the ten dollar bill. His drawing of Sir John A. Macdonald's face is coming along quite well.

She lifts a french fry to her lips and bites the tip of it delicately. "I don't see what that has to do with it," she says.

Then she returns the half-eaten fry to the basket and rests her hands on the table top, fingers splayed as if readying herself to play that knife game where someone takes the tip of the blade and dances it between her fingers.

"I'm marrying Nick tomorrow," she says. "It would be best for all of us if you didn't come."

With that, she stands and leaves him at the table.

Dale refuses to watch her go. He keeps his eyes on the money. Then he picks up the ten dollar bill and crumples it in his fist, squeezing hard, which is stupid, because he will only have to smooth it out again.
Posted by Brittany Smith at Friday, August 03, 2012