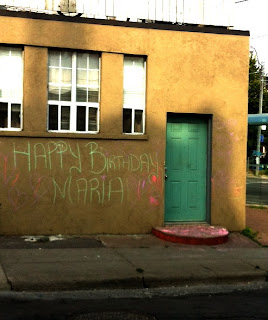 Nobody knew who he was. He walked through the front door and into the living room, and took a seat on the couch right next to Janice and Mike.

He wore a black suit with a white dress shirt, and a leather string tie. On his head was a sombrero cordobés hat that had the color and sheen of a raven's body. He was heavily mustachioed and had thick lustrous eyebrows.

A pink streamer from the ceiling had come loose and rested on his shoulder like a tropical bird. He held a package wrapped in silver paper and tied with a ribbon.

"I have come for Maria," the man said in a low rich voice.

Maria had been helping herself to sangria when this stranger arrived and was frozen, mid-pour. The ladle in her hands hovered over the punch bowl.

Maria returned the scoop of wine-soaked fruit to the bowl. She straightened her dress and then made her way to the couch.

He stood and motioned for her to take his place on the couch.

"Please. I am Jose Juan Christos. I come from Guadalupe to Toronto to bring you this treasure on the celebrated day of your birth."

He held out the package.

Maria tore open the wrapping to reveal a plain brown box. Inside the box was a small glass jar with grey powder inside.

"Behold. Your great-grandmother, Alia Maria Concerta. She was stabbed with twenty-seven silver arrows before she died. A magnificent woman."

Nobody moved. The man took Maria's hand and kissed it. Her heart beat wildly in her chest.

"Okay, thanks," Pete said, "you want some chips or something."

He bowed low. "I am not for the chips. Now I go, like the fox," he said. With that, he slipped out the door and was gone.

Maria placed the glass bottle on the mantle. Somebody turned on the music, and the party resumed.
Posted by Brittany Smith at Friday, August 17, 2012