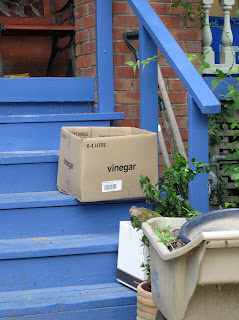 The old man's roses have got to die. It's such a fraud: her next door neighbor having a beautiful garden when his soul is so rotten.

First he called the cops that time she was hosting a full moon party. Then he left the gate open and racoons ate Frodo, her chicken.

And now he's murdered her cat.

Soliel considered dousing his precious flowers with Roundup weed killer. But there's too many harmful chemicals in it. The groundwater shouldn't have to pay just because her neighbor is a monster. She decides to use white vinegar instead, and borrows her mom's Costco membership card.

In the checkout line at Costco, Soliel wants to slice the palm of her hand with her car keys and swear vengance. In the name of Angkor Wat.

Two days ago, Angkor disappeared. She filled his bowl with the organic cat food he loves, the one with the raw turkey and brown rice and flax seeds. She called for him, but he didn't come. Outside, her neighbor was pruning his bushes. Everything about him filled her with rage.

The tilt of his brown Tilley hat. Each careful snip he made with his pruning shears. The contended smile on his face. She knew he was mocking her.

Soliel makes her move under the cover of night. The 4 litre jug of vinegar is heavy. She tips it up and then dumps it all over his roses. The ammonia sears her nostrils and she gasps.

Just as the last drop of vinegar has fallen from the lip of the jug, Soliel looks down to see Angkor's black and white furry body at her feet. The cat winds himself through her legs, purring.