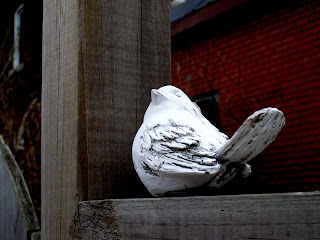 Tell me a story, Daddy.
I don't know any stories, sweetheart.
You do. Tell me the one about the bird.

Once upon a time in a kingdom pretty close by, there was a princess named Sophia. Sophia had everything you could wish for. Cake for breakfast. A trampoline in her bedroom. No tooth brushing or toe scrubbing, ever. But what Sophia didn't have, was a brother or sister.

And in the way our hearts crave the one thing that's missing, Princess Sophia longed for a sibling. The only child our heroine had to play with was Prince Rob from the next palace over. Prince Rob was a loathsome boy. He had boogers in his nose, and even more disgusting things crusted in the folds of his neck. Rob liked to set fire to the bottoms of the ladies' gowns and put hunks of stinky cheese down the knight's suits of armor.

See what I mean? This kid was a real creep.

One afternoon, Rob snuck into Sophia's garden and discovered her whispering to a small clay bird. Our horribly lonely Sophia had named the statue "Angelique." It was her little sister.

"Get away from me, you filthy troll!" Sophia squealed.

At the sound of these words, Rob smacked Angelique from Sophia's hand and the bird smashed onto the stones.

What do you think happened next? Perhaps a fairy godmother appeared and gave Princess Sophia a real sister? Or maybe an evil witch arrived and turned Prince Rob into a toad? That's what you'd guess, cause you've heard fairy tales like this before. Except you'd be wrong.

Rob turned to Sophia. "I'm really sorry he said." His eyes were wide and a nice blue, and maybe there wasn't so much grime on the back of his neck as she'd originally thought.

Rob pulled a key ring from his pocket. The large brass keys jangled together. "Stole these," he said, "wanna check out the dungeon together?"

You know the rest, right? They lived happily....