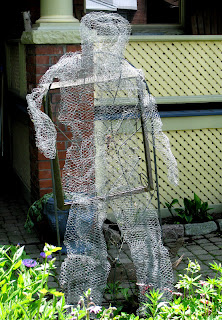 That wire man is Jane's dad.

It's her fault. She used plyers to twist the chicken wire into shape. Then she stood him in the front garden to keep the birds out of her elderberry bushes. She was even pleased with herself for her ingenuity.

But once she was inside and looked out the window, Jane could see that it's her Dad she made.

It felt like hot liquid was running down her spine. She yanked the curtains shut.

In the kitchen, she tried to finish her breakfast. She pierced her eggs with her fork and the yolk oozed over her plate. It was the yellow of rubber boots. Or the sun in a child's drawing.

Jane pitched the whole plate straight into the garbage bin and heard the thud as it hit the bottom.

She considered calling in sick to work. But what would she tell them?

"I've accidentally constructed a wire man who looks like my father, and now I'm scared to leave the house."

No. She had to go. In her bedroom, she dressed quickly. She gathered her things together and closed her briefcase. The latch made a deliberate snapping sound as it shut. An adult sound.

On shaking legs, she left the house, remembering to lock the door. Clutching her briefcase in one hand, she headed down the walkway.

She stopped in front of him and lifted her free hand, resting it on his wire chest, where his heart would be if he had once.

Then with all of her strength, she pushed him over.
Posted by Brittany Smith at Monday, August 06, 2012