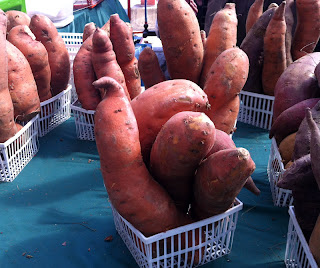 Billy Ray never brought a girl home because his family embarrassed him.

Growing up, he didn't think they were different than the other vegetables. But once his family was harvested and brought to the market, Billy Ray noticed with horror that sweet potatoes were rough and dim-witted, and in truth, a little odd.

"Hey Billy," said his brother, Bart, "lookit the rump on that tomato over there. Oooh wee!"
"Shut up, Bart," Billy hissed, "don't be so rude."
"Whatsa' matter with you?" Uncle Earl said to Billy, "you think you don't got spots on yer skin like the rest of us?"

Billy Ray was just about to answer, when he saw her sitting on the next table. Her name was Katherine and she was a Pandora Striped eggplant. Katherine was smooth and curvy. Her deep purple skin was glossy and streaked with white. She was the most beautiful thing Billy Ray had ever seen.


Billy couldn't believe his luck when they were placed in the same cloth bag. He worried his rough sides were bruising her delicate flesh. He searched for something to say to her.

"So you're an eggplant?" he said.
"Not just any eggplant," she said, "I'm an organic heirloom variety. And you're a...root?"
"Uh--" he stammered. He wanted to tell her that he wasn't just a root. He'd listened to the songs of earthworms and heard seeds sprouting. He knew the stories moles tell each other during long nights underground.

But at that moment, Billy and Katherine were joined in the bag by two yellow peppers, a zucchini, and some green beans.

Billy sat silently at the bottom of the bag listening to everyone chatter about life in the sun. Eventually, he drifted to sleep.

He woke when they were thrown into a colander. Then they were run under a tap and dumped, dripping, onto a cutting board. A knife flashed several times and the vegetables were chopped into cubes.

Billy Ray's wish had finally been granted. He was just like the others. And he realized, suddenly, that it wasn't what he wanted at all.
Posted by Brittany Smith at Monday, September 03, 2012